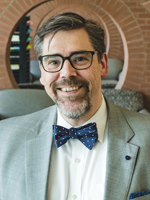 Tristan Denley currently serves as vice chancellor for academic affairs at the Tennessee Board of Regents. Before moving to the system office in August 2013, he was provost and vice president for academic affairs at Austin Peay State University from January 2009. Originally from Penzance, England, Dr. Denley earned his PhD in mathematics from Trinity College, Cambridge, and held positions in Sweden, Canada, and the University of Mississippi before coming to Tennessee. At Ole Miss he served as chair of mathematics and senior fellow of the Residential College program.

Throughout his career, he has taken a hands-on approach in a variety of initiatives impacting student success. In 2007, he was chosen as a Redesign Scholar by the National Center for Academic Transformation for his work in rethinking the teaching of freshman mathematics classes.

At Austin Peay he created Degree Compass, a course-recommendation system that successfully pairs current students with the courses that best fit their talents and program of study for upcoming semesters. This system, which combines hundreds of thousands of past students’ grades with each particular student’s transcript to make individualized recommendations for current students, has received recognition from Educause, Complete College America, the Bill & Melinda Gates Foundation, and President Obama, and won a platinum IMS Global Learning Impact Award in 2014.

Dr. Denley was the recipient of the 2016 Newel Perry Award from the National Federation of the Blind for his leadership of a systemic approach to the accessibility of educational content.

His most recent work has been to transform developmental education and advising at a system scale. His work continues in using a data-informed approach to implement a wide variety of system-scale initiatives surrounding college completion, stretching from education redesign in a variety of disciplines to the role of predictive analytics and data mining, cognitive psychology, and behavioral economics in higher education.